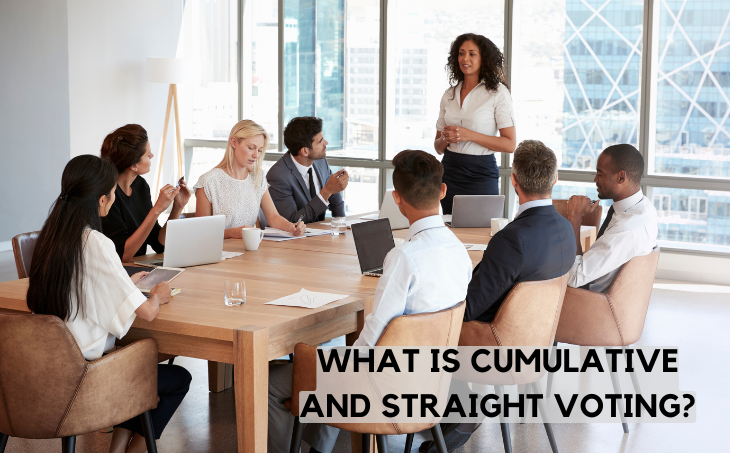 There are many considerations to make when figuring out how to finance your business. Selecting which way to raise funds each way holds other questions to consider. Like with choosing to issue shares. Other considerations to be made would be the type of shares, as well as rights. When these questions are ignored by incorporators, there can be serious consequences.

When cumulative voting is selected as the right type of voting system to fill executive roles, shareholders are granted certain rights. These rights allow for shareholders to have votes equaling the number of shares held multiplied by the number of different positions the shareholder is voting for.

In this hypothetical example, consider if this model would work for your corporation’s open seat voting.

The other option to finance your corporation is called straight voting. With this option, each shareholder only has votes in number equal to the number of shares they own, for each candidate. For example, if a shareholder owns 1000 shares in PIE Company, and there are five people running for the open seats, the shareholder retains 5000 votes. The catch here is, no single candidate may have more votes than the number of shares owned.

Straight voting is commonly called statutory voting and was built to help make company decisions with the input of shareholders.

Straight voting’s inherent issue of involvement of minority representation is still alive today. The times are changing on inclusivity, so there may be change of this in the future. Maybe.

The votes are allocated in proportion to the number of candidates running for the open seat. The majority shareholder will always have the upper hand when it comes to choosing the winning nominee. Under straight voting, minority shareholders don’t have the weight other shareholders do. To combat this unbalance, the use of cumulative voting should be enacted more often, bringing the minority voters room to be heard and new ideas to be examined.